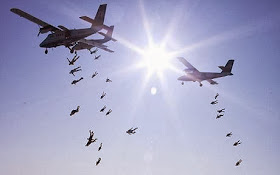 Below you will find a list of Skydive Aircraft or "Jump Planes". Occasionally helicopters, Stearmans, C-130s and even DC-9s are used to fly skydivers.  However, this list will only include the current and most common aircraft used for skydiving worldwide. We are also not including variants of these jump ships ie. the 24 various C182 models.

In alphabetical order by manufacturer: 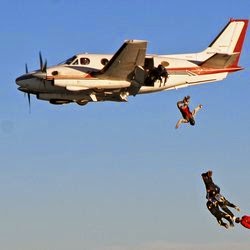 The fastest climbing jump planes in the world are King Airs.  They are also the 2nd most common twin engine jump planes in North America.  The average King Air with its PT6A-20 engines, can take 15 skydivers to 13,000ft in about 10 mins and burn about 22 US gallons.  The engine upgrades available are the -27, -28 and -135, some with horsepower ratings as high as 750. It is not liked by all skydivers due to its low wing and small door. To learn more about the King Air check out our affiliate website TurbopropNation.com 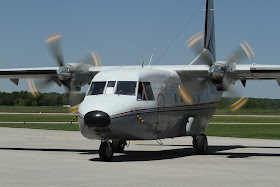 Introduced in 1974 and still in production the CASA (Construcciones Aeronauticas SA) C-212 is a twin turbine powered medium STOL transport aircraft. This jumpship climbs fast, carries 28 skydivers and has large exit ramp. It can be found at various drop zones around the world including Skydive Paraclete XP in North Carolina. 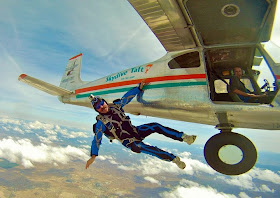 Introduced in 1956 and built in the U.S., France and Argentina, it is by far the most common jump plane in the world. The average C182 is powered by the Continental 230hp O-470 engine and can take 4 skydivers to 10,000ft in about 20 mins. They usually have a modified exit door that swings up like a garage door instead of forward like a car door. They also usually have a small platform or step over the right main landing gear. Operators love the relatively low operating cost and skydivers like the high wing design.

A popular single engine piston powered jump plane, especially the turbo equipped version. A step up from its sister the C182. It is faster, roomier and the 206 "U" models have a nice sized rear exit door. There are even a few that are converted to turbine power by the Soloy Corporation. 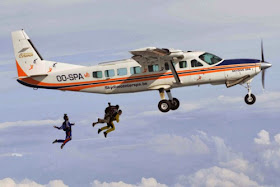 The Cessna Caravan is by far the most common and popular single engine turboprop jump plane in the world.  It has one of the most reliable engines ever produced, the Pratt & Whitney PT6A-114A. The C208B Grand Caravan (675hp) climbs good and the Black Hawk (850hp) and Texas Turbines (850hp) conversions climb great with up to 21 skydivers. What they all have in common and what the skydivers love is the high wing and very large exit door. For information on how to properly fly skydivers in the Caravan click here. To learn more about the mighty Caravan, check out our site dedicated to it, CaravanNation.com 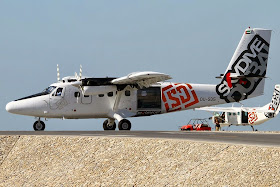 This bird has been around since 1966 and is the most common and popular twin engine jump ship in the world. In 2006 Viking Air bought the tooling and Type Certificates and started manufacturing them again. "We CAN rebuild her!" She is commonly powered by another Pratt & Whitney "Dependable Engine", the PT6A-27. It can haul 23 happy skydivers to 13,000ft in about 13 mins. Skydivers love its high wings and large exit door. To learn more about the Twin Otter, check out our affiliate website TurbopropNation.com 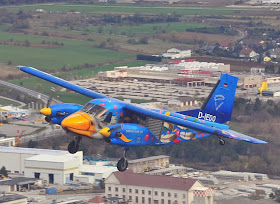 A fast climbing, tail dragging, Slovakian derivative of the Skyservant. It's fitted with two Walter M601-D2 turbine engines. Skydivers love it's exit door, which is slightly larger than the door on a Caravan. Pilot's love its great center of gravity characteristics and climbing speed. This bird will haul 15 skydivers to altitude 4 times in one hour.

The Old Lady of the Skies! This author's favorite airplane of all time! Since it first dropped paratroopers on D-Day it has been loved by every pilot that ever flew her. At one time there were quite a few of these beloved birds flying skydivers. Although it has two large 1,200hp radial piston engines, it was never known as a fast climber. Even at almost 80 years old there are still a couple drop zones flying it, including Skydive Arizona. Long live the Gooney Bird! 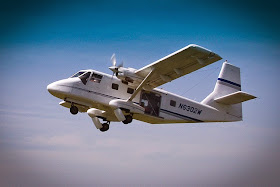 Built in Australia, this jump ship is flown at drop zones in New Zealand and the U.K.  It is a high wing STOL aircraft powered by two 420hp Allison 250-B17C turboprop engines. It quickly carries 13 skydivers to altitude. 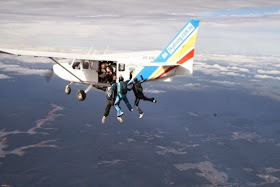 This is an Australian built, high wing, piston powered, miniature Caravan. It has a 300 hp Lycoming IO-540 engine and can hold up to 8 skydivers. This jump plane is found mostly in Australia and Europe. 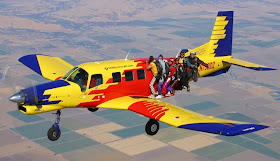 The pride of New Zealand! Other than a beefed up Grand Caravan, this is the fastest climbing single engine jump plane in the world. Powered by the PT6A-34, it carries 17 skydivers to 13,000ft in 15 minutes. Complaints from skydivers include the wing spar running across the floor of the cabin that they have to step over, it's low wing and it's tapered smaller exit door compared to that of the Caravan. To learn more about the PAC-750, check out our affiliate website TurbopropNation.com 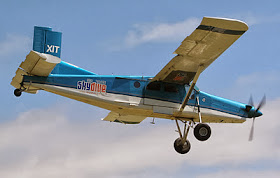 A common and popular tail dragger jump plane in Europe, especially the turbine equipped version.  Not so much in the States, with only a few drop zones operating it. It can carry 9 skydivers to altitude fast or slow depending on if it's turbine or piston powered. Skydivers love its high wings and large sliding exit door. 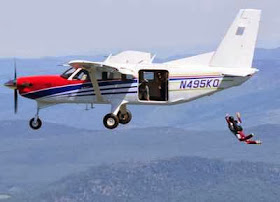 This is this newest manufacturer of aircraft that fly skydivers. Comparable to the first Caravan (C208A) but with no engine upgrades available yet. Skydivers love its large door and high wing, however DZOs don't like its high price of almost $2 million and not a lot of used surplus available. But we definitely believe that you will see more of these birds at DZs near you. To learn more about the Kodiak, check out our affiliate website TurbopropNation.com 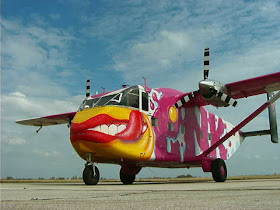 The Skyvan is a favorite of most skydivers because of its 6 ft tall rear exit ramp. It can haul 23 skydivers up to altitude in a fair amount of time.  A rare jump plane, with only 4 drop zones in the U.S. and a couple in Europe that own and fly it. You will mostly see it at large boogies or competitions. 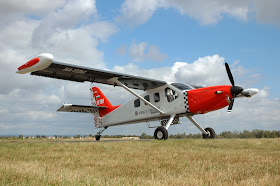 A turbine powered, fast climbing Russian tail dragger. Skydivers love this bird for its high wing, large sliding exit door and climbing speed. This jump plane will carry 10 skydivers on one bench. Features large outside step and inside and outside handrails.